Serge For The Truth 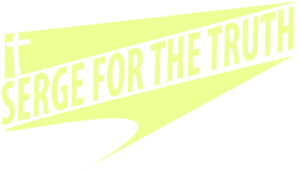 Apostle Paul in his generation by God’s grace was man of choice like many of us now. He was born in Roman empire in city Tarsus. Circumcised the eighth day, of the stock of Israel, of the tribe of Benjamin, an Hebrew of the Hebrews; as touching the law, a Pharisee;Concerning zeal, persecuting the church; touching the righteousness which is in the law, blameless a Hebrew from  Hebrew and blameless according to the law of Moses. He was exceedingly straight in every aspect of his life whether he went against the Church of God unknowingly, by ignorance, or served Lord Jesus with all his heart. Jesus Christ met him on the way to Damascus with letters from high priest. Saul (his former name) Got converted and was sent to preach  the Gospel of Grace of God . He ran his race. His race was not an easy one. He has to fight not only the spiritual enemy in a heavenly places, but with his own body his own flesh, he says of himself :  “I therefore so run, not as uncertainty; so fight I, not as one that beateth the air: But I keep under my body, and bring it into subjection: lest that by any means, when I have preached to others, I myself should be a castaway.” He strives  to keep his own body into submission in order to win the race. A race is not only with someone else, but we need to concur our selfishness in order to win the battle over your sinful desires of the carnal flesh. This is altogether not just a physical race it is spiritual race.
What kind  of race do we have? What battle are we in? Are we heading in the right direction in our life? Do we want to win a prize of our race as Christians? We  need to run a race for it.

There is more temptations now not to run the race than it used to be in the past. With every age a different racing pace. And as Lord Bacon once said: A tortoise on the right path will beat a racer on the wrong path. Its our decision and our passion. The direction where to run is not a secondary thing. As the priority we have for the speed when the athlete compete so also is important the right directions. Lets not waste our life for nothing, invest yourself for the right race to receive a reward at the end. The right direction and right  occupation is the key.

As At the end of the life Apostle Paul he wrote to Timothy: I have fought a good fight, I have finished my course, I have kept my faith.

At the end of our life what will we say?

ARE WE LIVING IN THE LAST DAYS?